How to Weatherproof Coaxial Connectors

Coaxial, (or coax), connections are vital to modern day infrastructure.  Coaxial connections see heavy use in the world of telecommunications, (i.e. cell phone service), but they are also frequently used by internet service providers, radio and television broadcasting companies, and more.  With such frequent use, it’s important to ensure that coaxial connections are properly protected and maintained to ensure optimal performance. 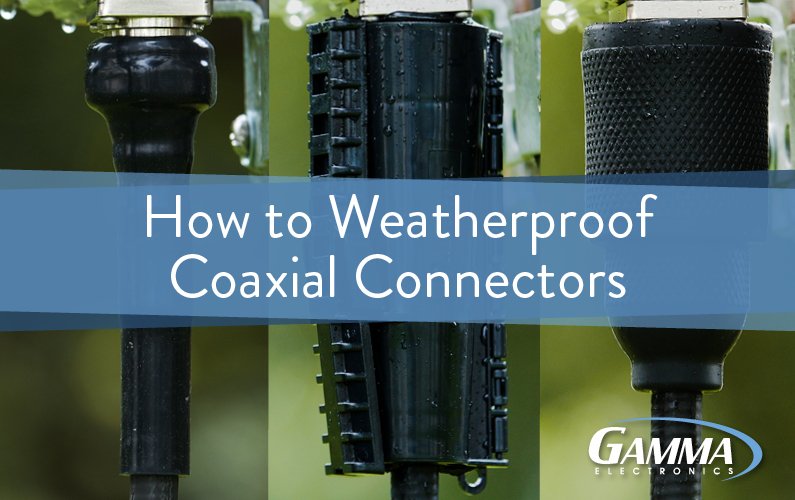 This leads to the question, how do you successfully weatherproof coax connectors?

There are numerous weatherproofing solutions for coaxial connectors, each of them being beneficial for different scenarios.    6 of the most popular RF weatherproofing options are:

Below we take a quick look at the pro’s and con’s of each of these types of coax connector weatherproofing.

Cold shrink tubing can be installed in seconds and is quite possibly the best form of coax connector weatherproofing available, (depending on your needs and the circumstances).  It is a true “set it and forget it” form of weatherproofing that creates a watertight seal over connections and has incredible weather resistant capabilities, (including extreme temperatures). 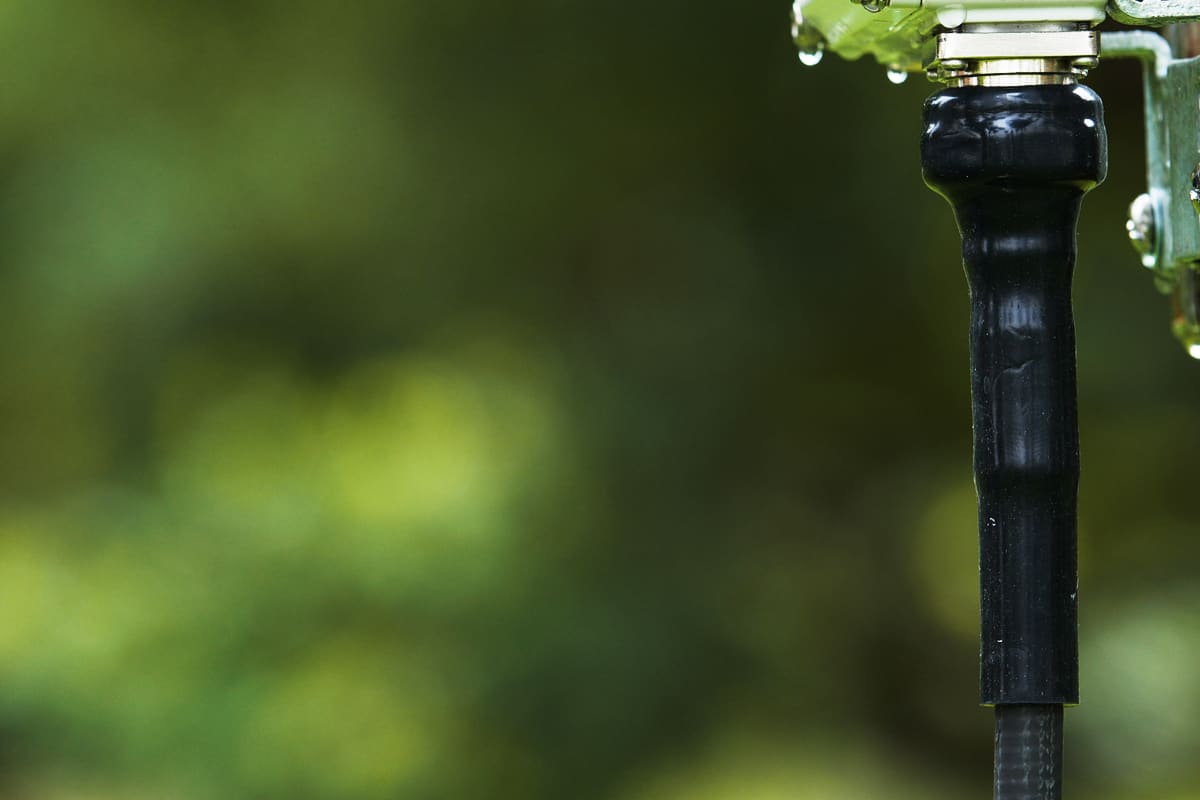 There are a couple things to know about cold shrink tubing however that may not make it ideal weatherproofing for every situation.  First, cold shrink tubing is not a “one size fits all” solution.  You cannot buy one size of cold shrink tubing and expect it to simply work for all of your connections.  A larger size cold shrink tube may not shrink down small enough for a smaller connector.  This is why we created numerous cold shrink tubing sizes that we have tested and perfectly matched to different coax connector and cable combos, as seen below. 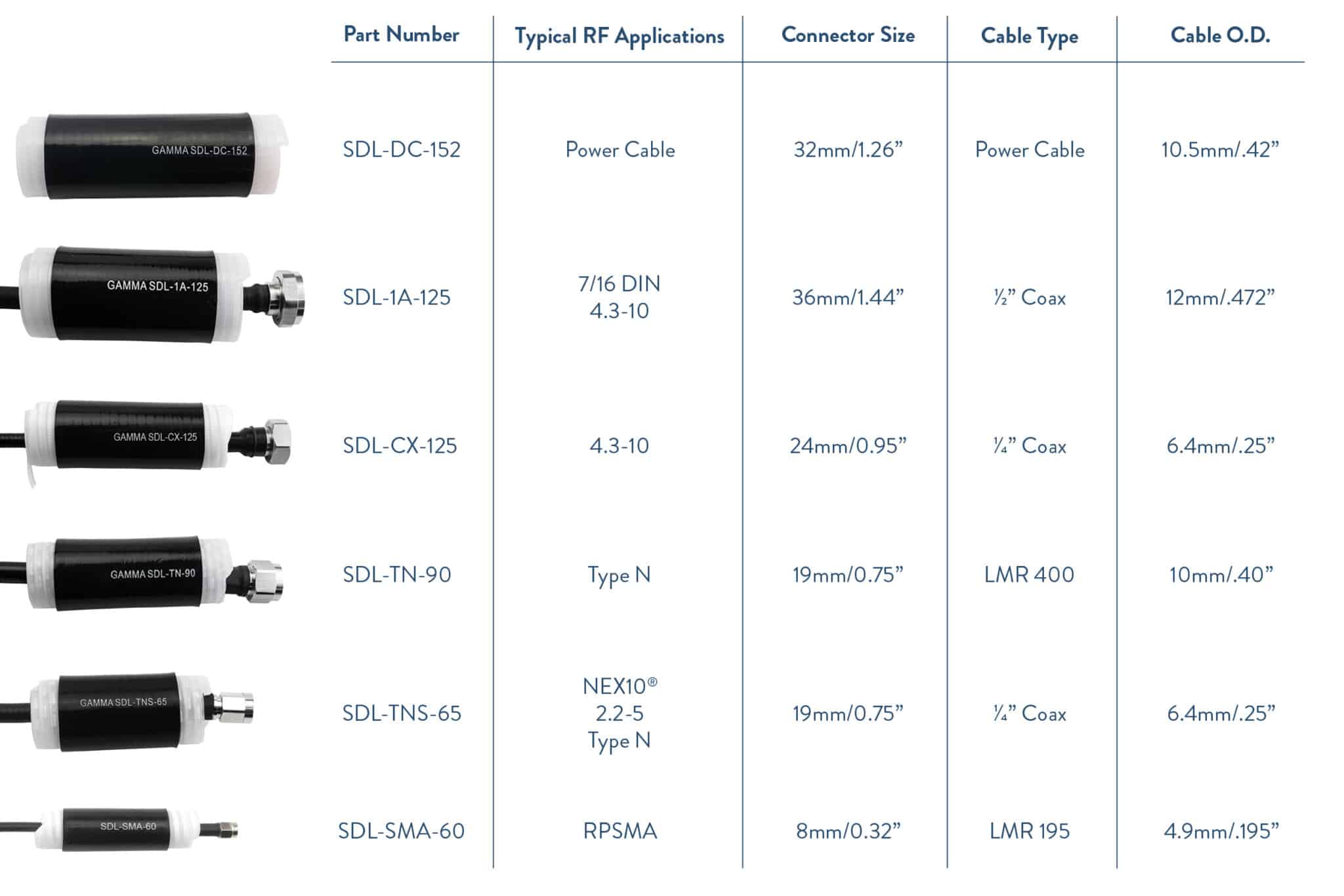 There are two other things you should know about cold shrink tubing before you buy.  First, cold shrink is not reusable.  Once installed, it is meant to stay on the cable.  It has no adhesive, so removal is fairly easy, but, again, it is meant to be a “set it and forget it” option.

Secondly, there are two types of cold shrink tubing, Silicone and EPDM, and you should know which one you need before you buy.  For the purpose of weatherproofing coax connectors you will almost always want silicone.  Silicone shrinks down smaller and tighter than EPDM and is also able to endure more extreme temperatures.  EPDM is better suited for use in environments where abrasion is more likely.  You can read more about EPDM vs Silicone cold shrink here.

Our silicone cold shrink tubing is our most popular form of coaxial connector weatherproofing.  Customers like AT&T use it because it means less return trips to towers and it typically only needs replacement when an antenna, radio, etc. needs replacement.  Our cold shrink tubing has become an industry standard as it has helped to massively reduce maintenance costs for companies using it for coax weatherproofing.

Slide Locks have an outer plastic shell and an inner silicone gel that wraps itself around the connection to create a watertight seal.  The outer shell has a sliding lock to hold it into place, and unlike cold shrink tubing, slide locks are reusable.   In other words, Slide Locks can be removed and reapplied.  Despite the option of being reusable, Slide Locks are still a great “set it and forget it” option, in the right circumstances.

In order to truly be watertight, Slide Locks must be made to very specifically match coax connector and cable combinations.  For example, if the cable type going into the slide lock is too small, it may be impossible for the Slide Lock to create a watertight seal over the cable.  For this reason, Slide Locks are only available in 3 sizes, as can be seen in the photos below, (where each Slide Lock is shown both open and closed). 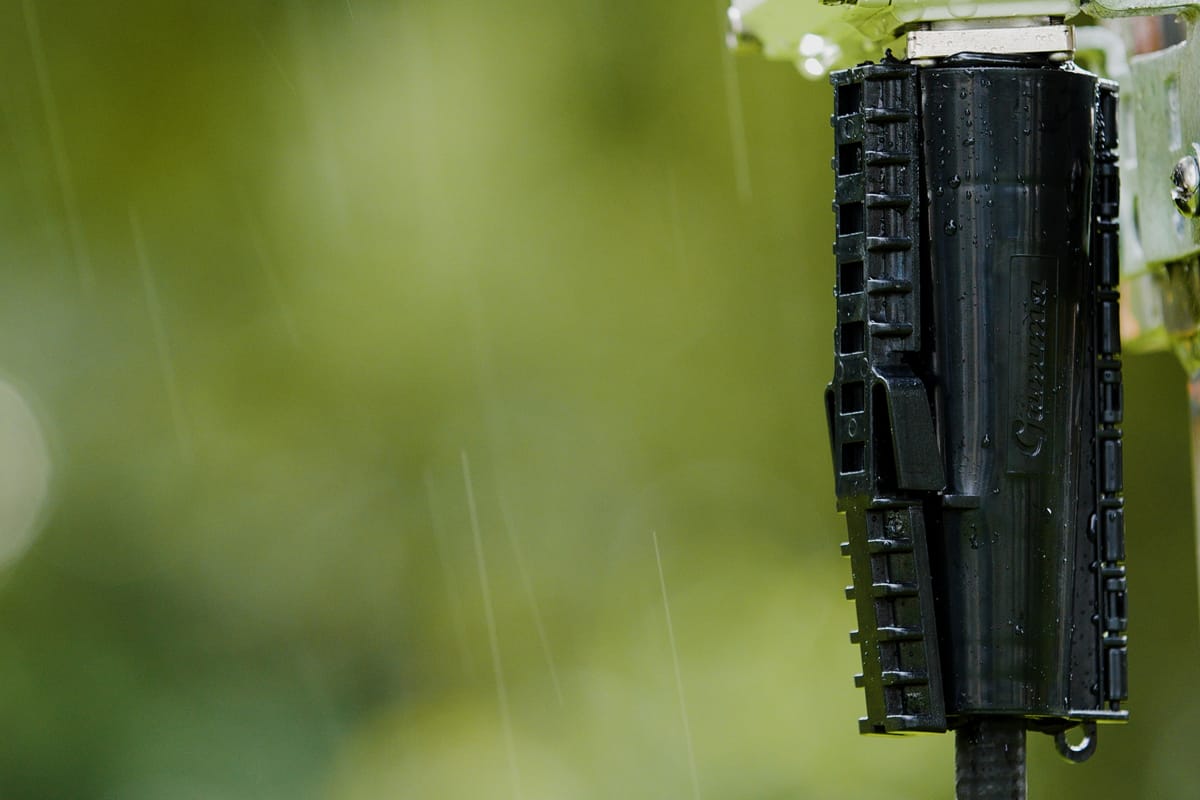 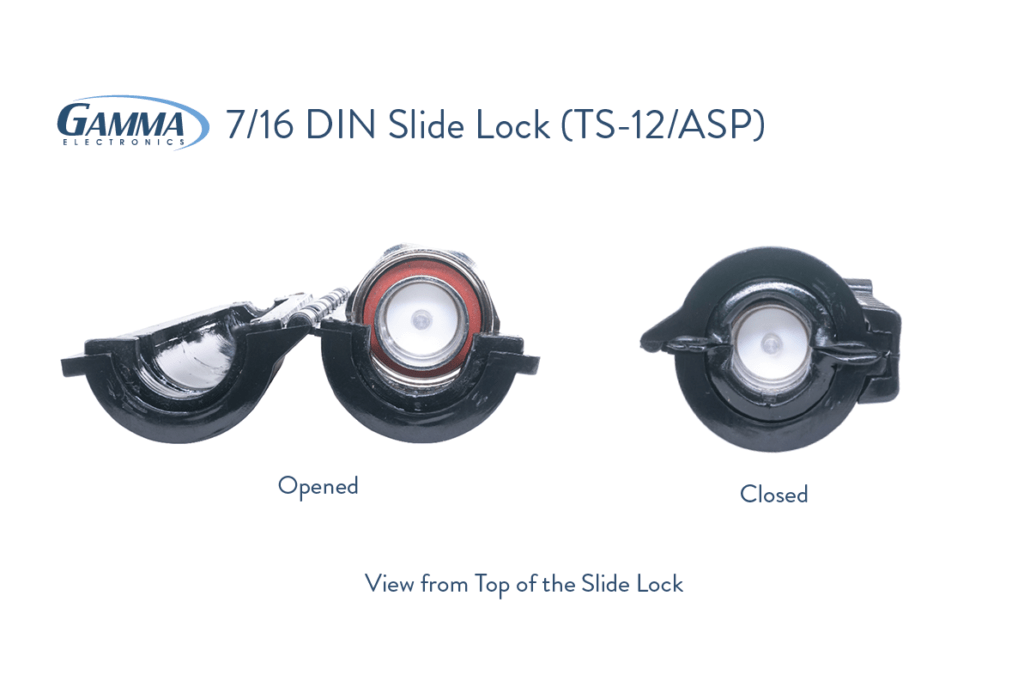 The last thing to note is that although Slide Locks are reusable, the longer they are left up the less reusable they become.  If you leave a Slide Lock up on a connection for several years, for example, the inner silicone gel will become more like a permanent mold around the connection.

We find that many of our customers who utilize Slide Locks use them as a permanent solution and love having the option to re-access connections easily, or possibly re-use the Slide Lock if circumstances permit it.

RF Weatherproof Boots are incredibly easy to install as they simply slide up and over the connection.  They slide back off of the connection just as easily, making them a great coax connector weatherproofing solution, especially when you are concerned about re-accessibility to the connection.

There are several types of boots on the market and we take pride in having a one-piece boot solution.  Some boots have a two piece, interlocking design but in our testing we have not noticed any noticeable improvements that merit the two piece design.  Our one piece boots are tested to meet IP68 standards, meaning that we place our boots over a coax connector and dunk it into a tank of water over 3 meters deep and for over 30 minutes.  Once removed, we carefully remove the boot and inspect the connection for any signs of water.  There must be no signs of water ingress in order for our boots to meet IP68 standards, which all of our boots do. 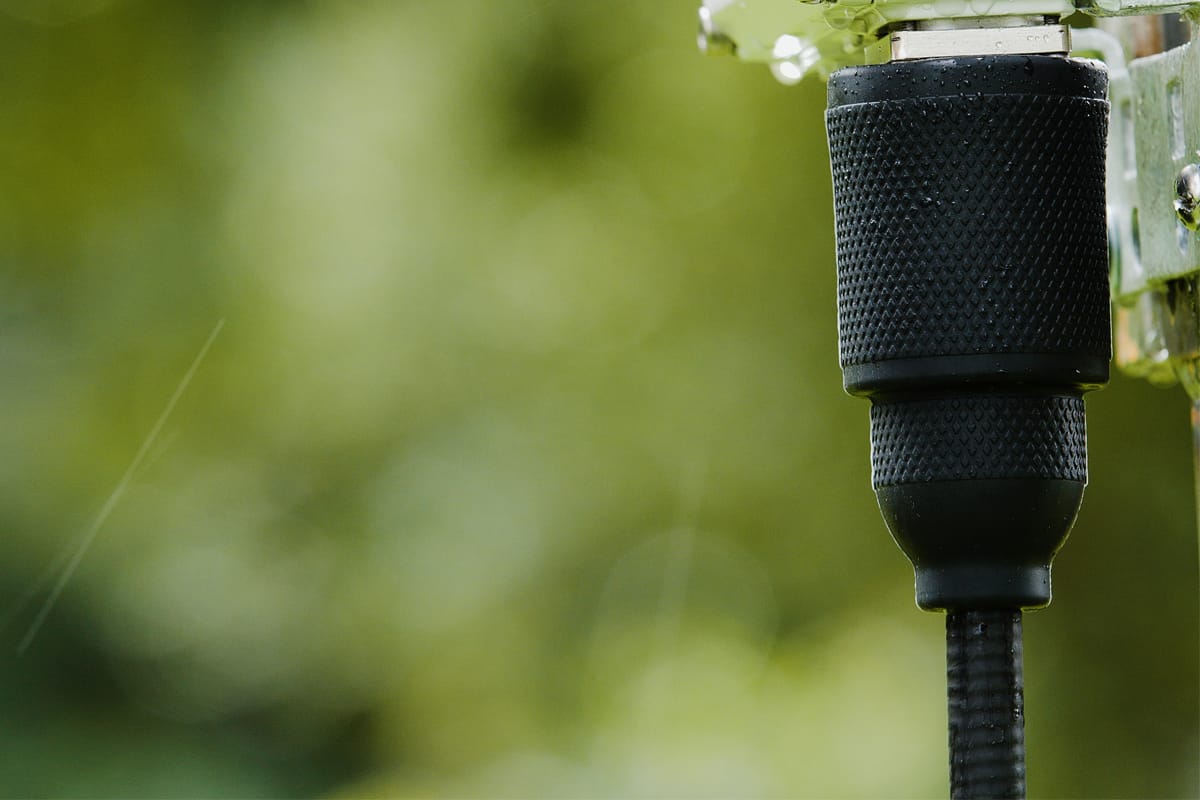 Beyond the weatherproofing results however, we take pride in our one piece solution because of the ease of installation. Two-piece boots typically need to be custom cut at the time of installation.  Not only does this result in a much longer installation, but we have heard many stories of dropped parts and bad cuts happening on site.  Our boots avoid these problems entirely. 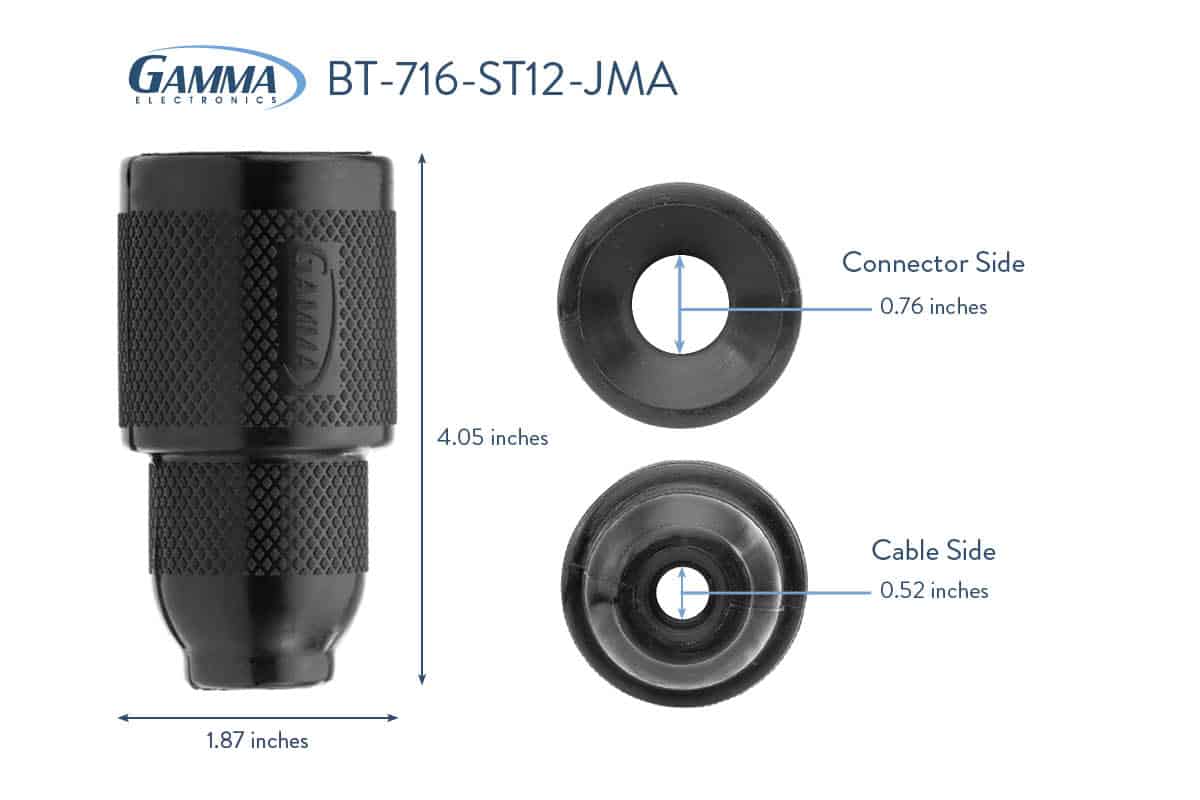 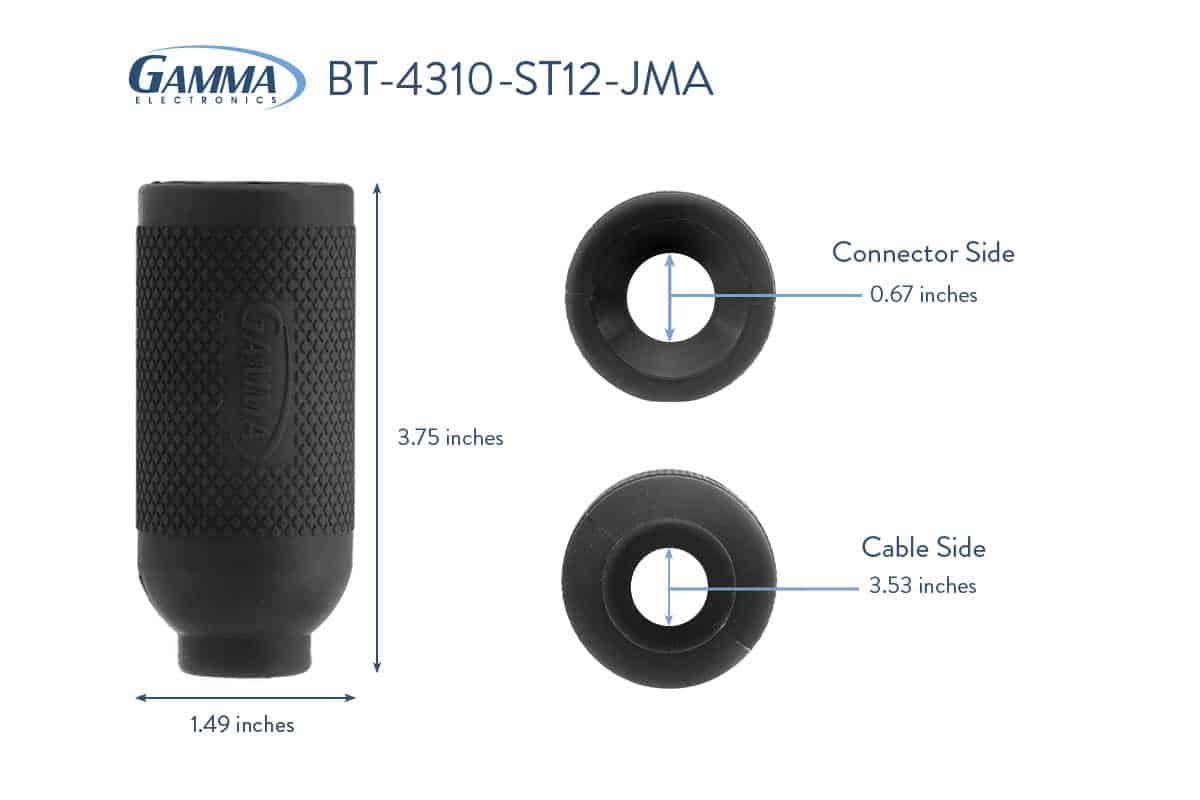 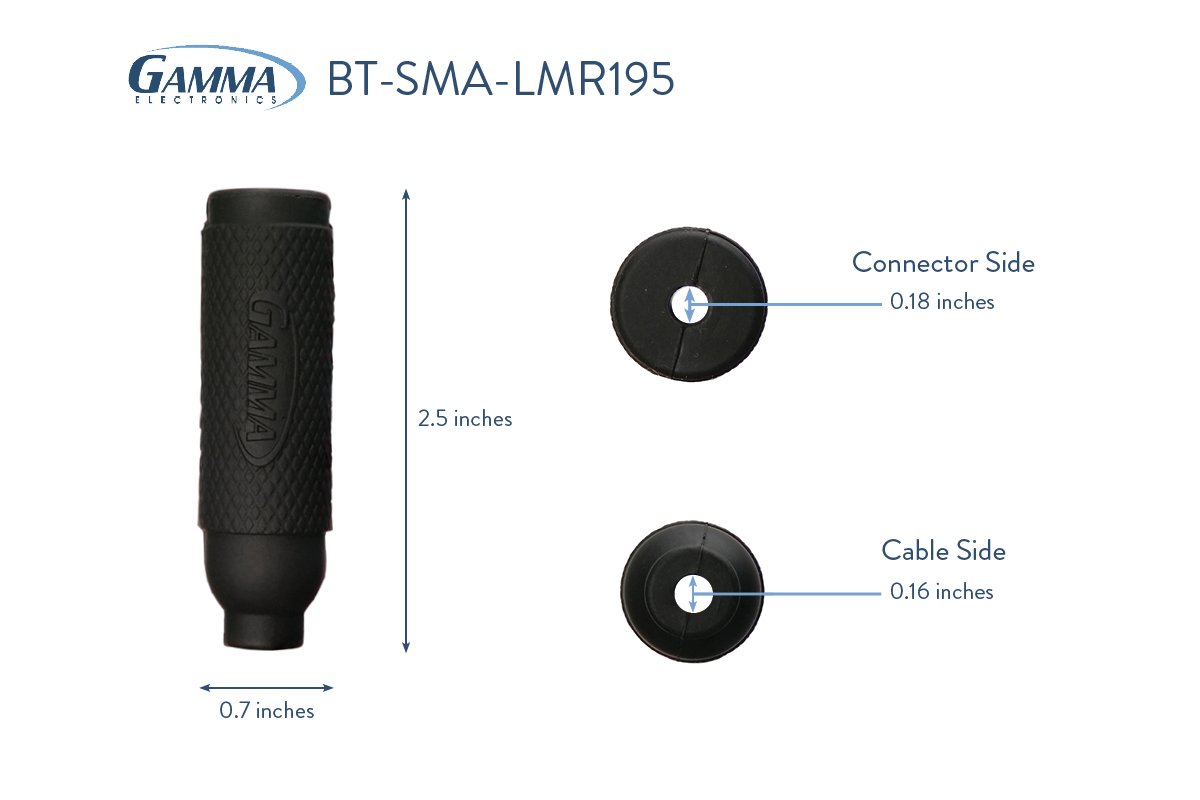 Secondly, for best results boots should be placed on a cable before the cable is terminated, (aka connector is installed on the cable).  We sell cables with our boots already on the cable to help solve this problem.  We also sell the boots on their own for those who are terminating their own cables. RF Weatherproof Boots also have the added benefit of being one of the only types of weatherproofing for coax connectors that has a right-angle option. 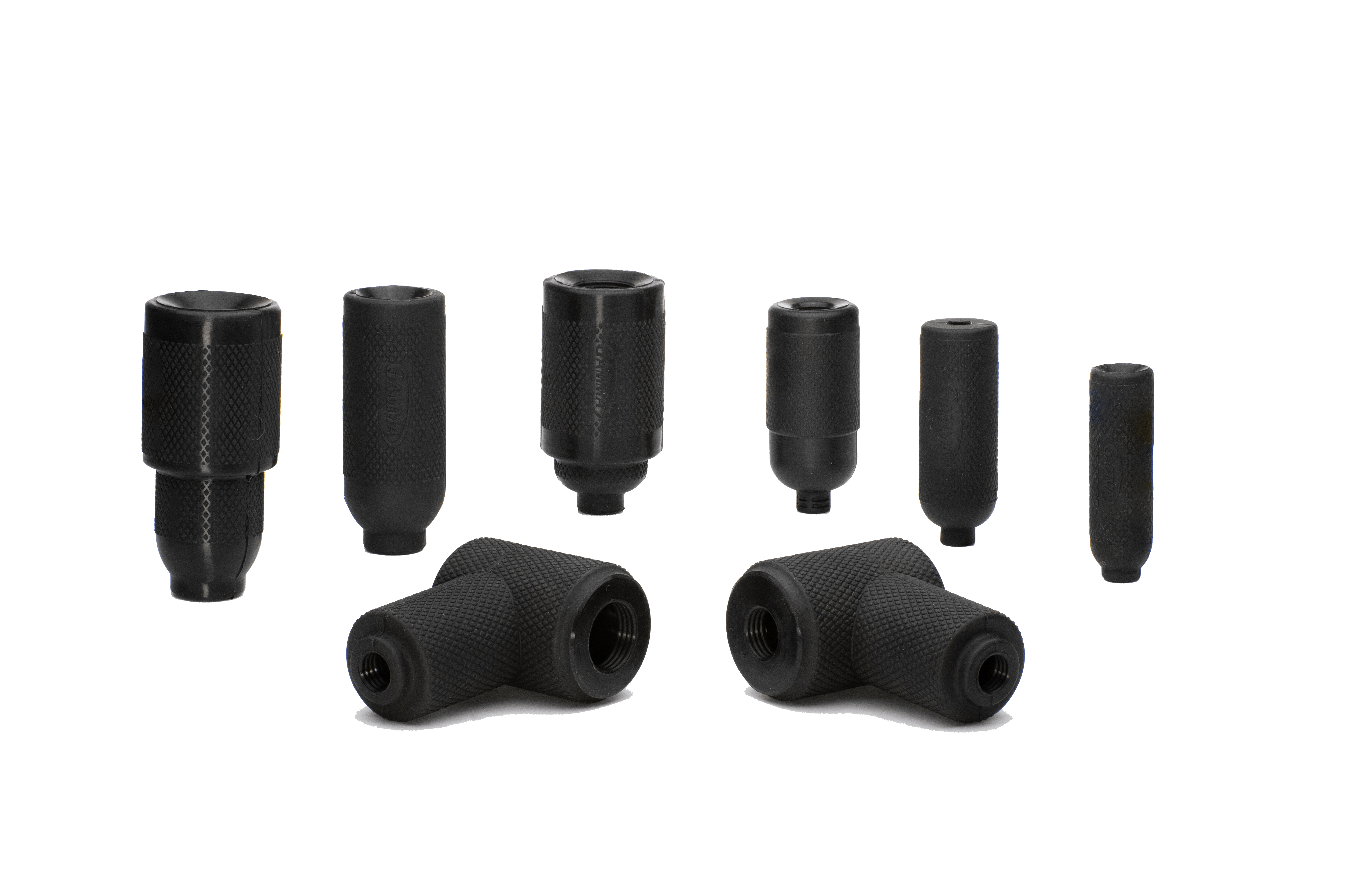 Our customers love boots, but typically they order them already on cables or they are going to terminate the cables themselves.  We also offer another type of boot, called the Suppressor Boot, that not only weatherproofs coax connectors, but also reduces RF interference at those connections.  You can learn more about Suppressor Boots here.

Magic Tape is known by many names: self-amalgamating tape, self-fusing tape, cold shrink tape, etc.  Whatever the name may be, the key feature that makes this tape so appealing is that it does not have adhesive.  This is important when it comes to RF weatherproofing in general,  as adhesive tends to melt in the heat and becomes brittle and less effective in the cold.  Long story short, adhesive and outdoor weatherproofing is, more often than not, a bad idea.

This is what makes Magic Tape so appealing, (it’s also why all of Gamma Electronics’ RF Weatherproofing products do not utilize adhesive).  When you stretch Magic Tape and layer it on top of itself the two layers of tape interweave, or “self-amalgamate.”  It creates an incredible bond often described as “self-fusing,” and because it does not require heat or adhesive  it has also earned the nickname of “cold shrink tape.” 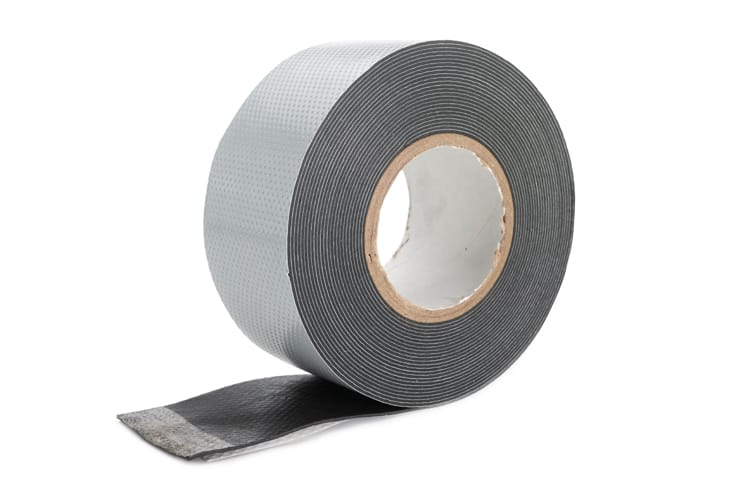 You can see Magic Tape in use in the video below.

Magic Tape is a fantastic solution but it should be noted that how successful it is as weatherproofing is highly dependent on the person installing it.  Cold Shrink Tubing, Slide Locks, and RF Weatherproof Boots are all a bit more foolproof when it comes to the installation process.  Magic Tape is easier to install than other solutions, (see Tape & Butyl below), but still requires some know-how.

We largely recommend Magic Tape for odd shaped connections that you might have trouble finding a solution like cold shrink, slide locks, or boots for.  Magic Tape is also great to keep around in case of repairs/maintenance.  You may not always have the exact size cold shrink or slide lock you need, but it’s pretty easy to keep magic tape on hand. 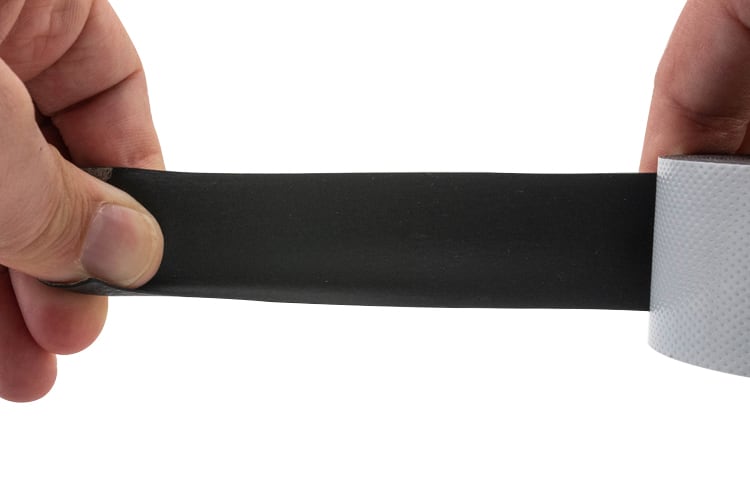 Tape & Butyl is one of the most commonly used forms of weatherproofing because it is typically the cheapest.  As the saying goes however, you get what you pay for.

While tape and butyl can work, (in certain conditions), it is very likely that it will need to be replaced within a year.  The reason for this is that the adhesive on the tape tends to break down, leading to the tape unraveling around the butyl.  In addition to the adhesive breakdown, butyl tends to melt and become runny in the heat.  Butyl is well known to melt its way into coaxial connectors, often causing VSWR issues.

Cold is also problematic for butyl, as butyl tends to become brittle and starts to crack in the cold.  These cracks eventually mean you have openings for water to work it’s way into the connection.

Over the years tape and butyl have slowly been seeing less use, but they certainly have not been phased out altogether.  We nearly always recommend avoiding tape and butyl as they have much longer installation times and require far more maintenance than other weatherproofing solutions. 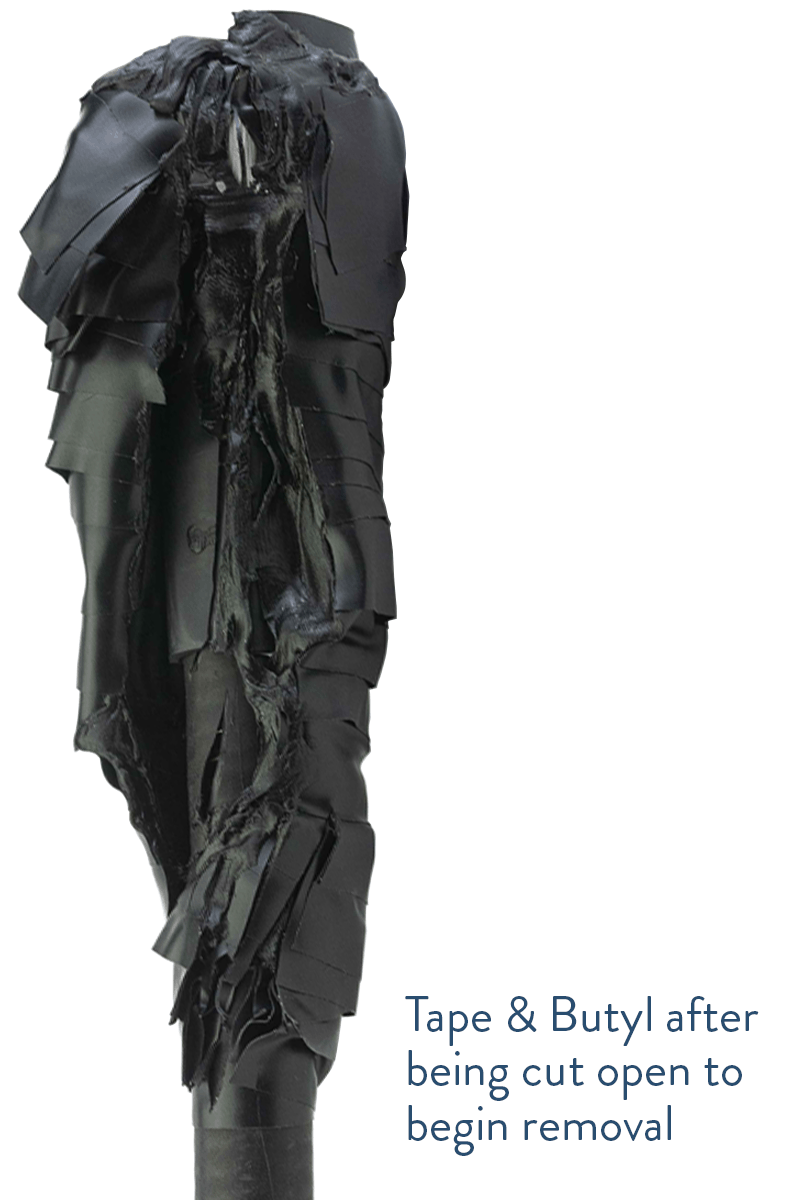 Can you use Heat Shrink Tubing for coaxial connectors?  While it is possible, we do not recommend it.  There are a few reasons as to why.

First, to create a watertight seal you would need to use a heat shrink tubing that has adhesive.  As discussed in the above sections, adhesive is not reliable outdoors, specifically when you need your weatherproofing to hold up against both the heat of summer and the cold of winter. 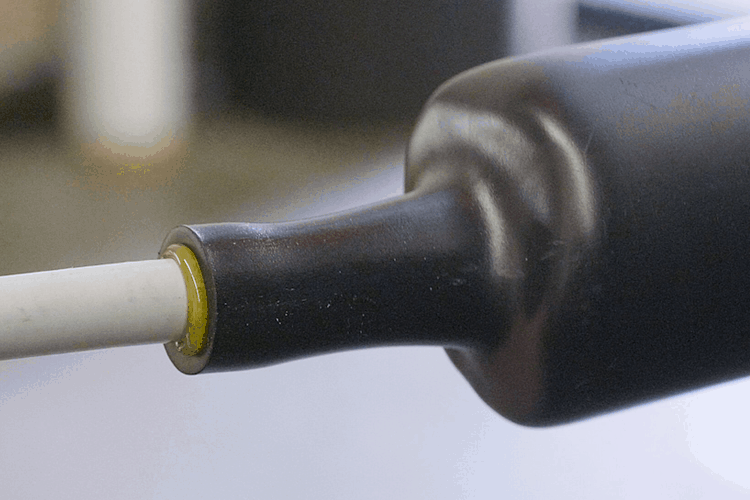 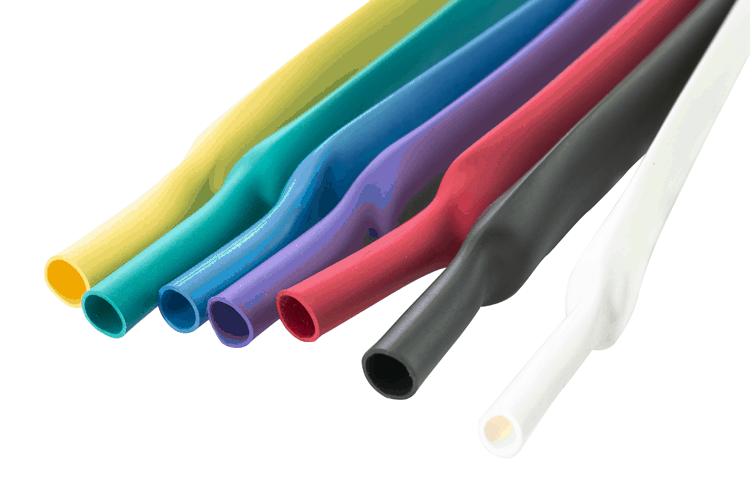 Lastly, as the name suggests, heat shrink tubing requires heat to be installed, and typically very high temperatures at that.  Most heat shrink tubing will only start to shrink around 200° Fahrenheit, (with some tubing requiring much higher temperatures), which means a heat gun or blow torch is needed.  Heat guns and blow torches not only make the installation process more complicated and time consuming, but also more dangerous.

To make a long story short, as much as we love heat shrink tubing, (and we really do), we cannot recommend it as weatherproofing for coaxial connectors.

There are numerous ways to weatherproof a coax connector but ultimately the decision on what to use comes down to your needs.  We often find that customers will purchase different types of weatherproofing that all go on the same tower.  It is truly, highly dependent on your needs.

What is important to consider however, is that choosing the right coax weatherproofing can vastly reduce your maintenance and your installation times.  Choosing the wrong RF weatherproofing in the beginning will almost always come back to haunt you in the end. 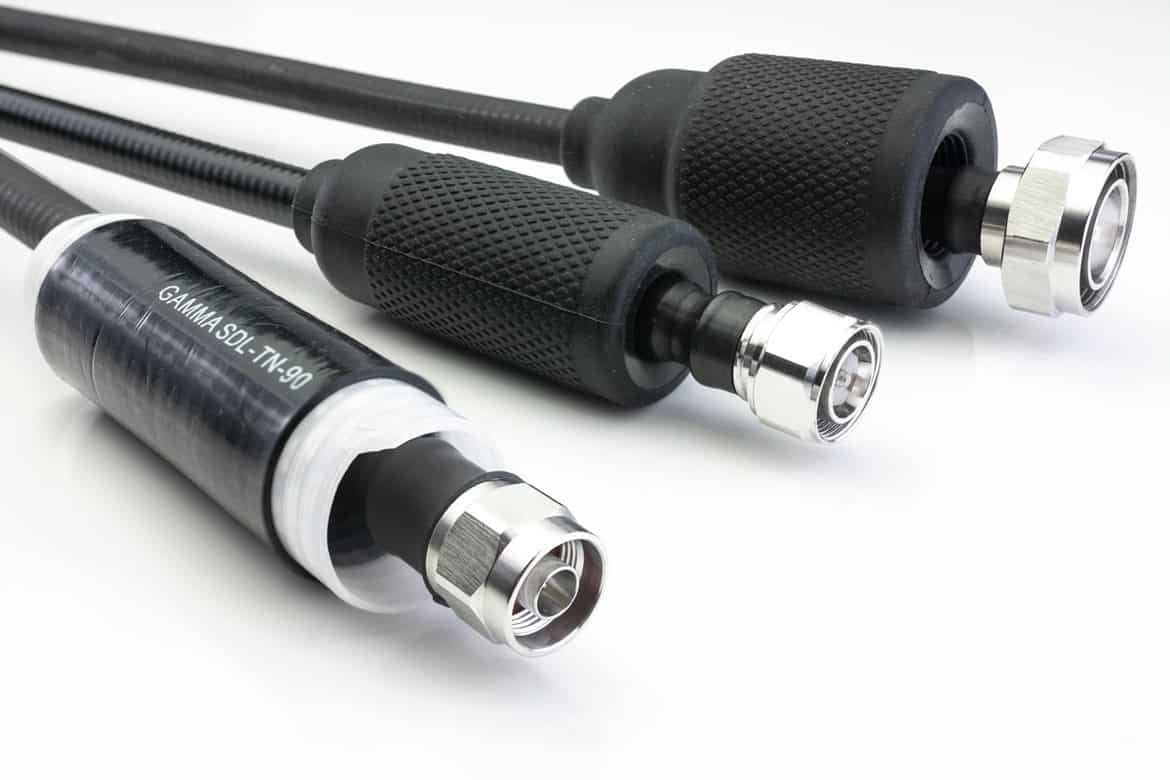