The term “plenum,” can reference different things in different industries, but whether we’re discussing HVAC or plenum cable, it all references back to the plenum space of a building.  So, what is the plenum?  What is plenum cable?  We answer those questions and more, and you can see every plenum related question we answer in the list below.

Plenum, (pronounced PLEH-nuhm), is a separate space in a building, typically between the building’s ceiling and a drop-down ceiling, that is primarily set aside for air circulation.  This plenum space is purposefully designed to house HVAC equipment, (or heating, ventilation, and air conditioning).  You can think of the plenum space in a building almost as the lungs of a building.  The HVAC equipment inside the plenum pulls the air in through vents and pushes the air back out through ducts that send the air to rooms throughout the building.

The Plenum does not always have to be in a ceiling space however, as some buildings do have the plenum placed beneath the floor.  Similarly, plenum space does not only have to be used for HVAC, and it is becoming increasingly common to see communications cables, like networking cables, also utilizing the plenum. 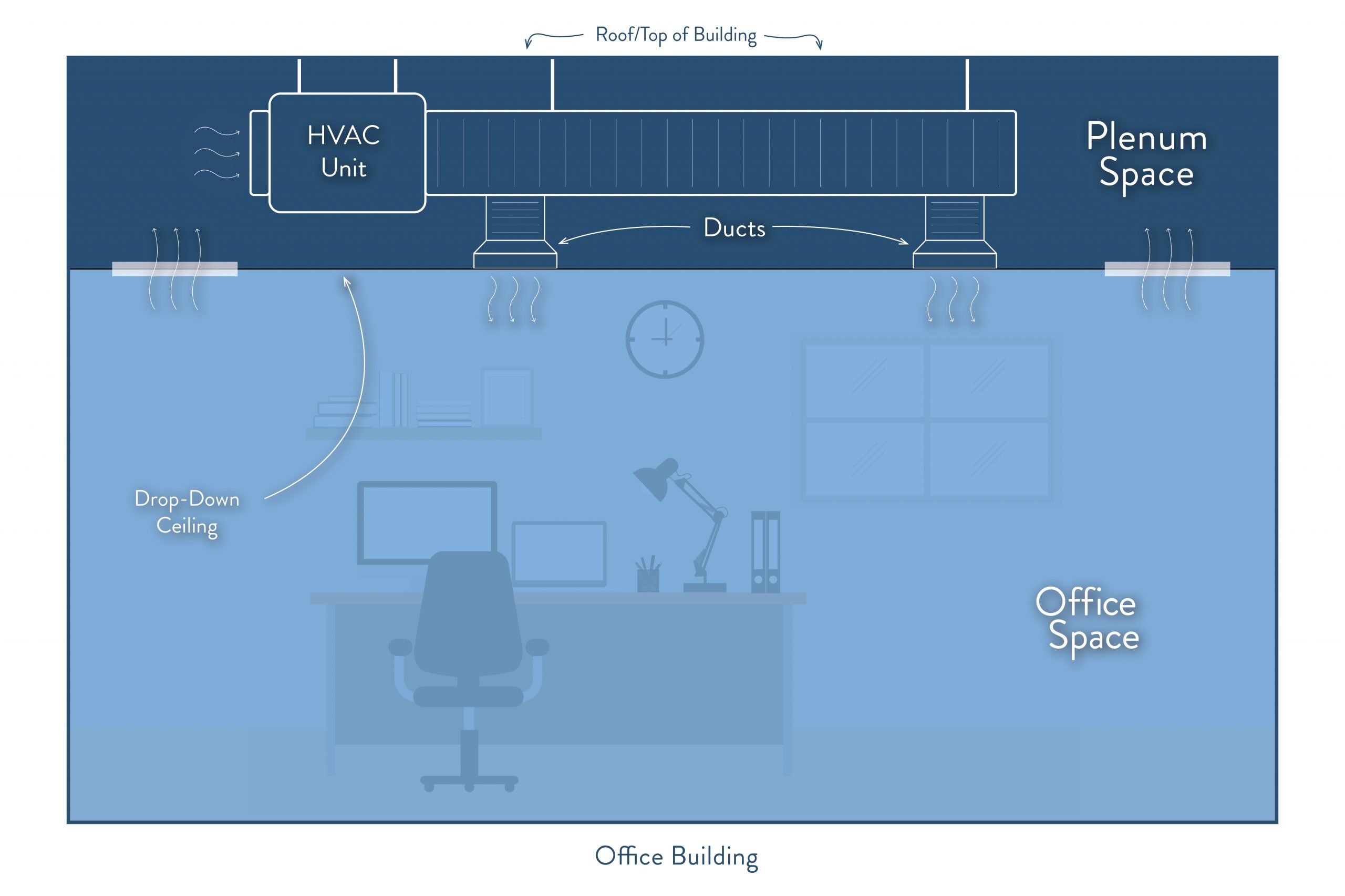 What is Plenum Cable?

Plenum cables are cables designed specifically for use within a building’s plenum space.  Because the plenum space is used for air circulation, it is critical that anything used inside the plenum not impact air quality or increase the danger of fire.  For these reasons, plenum spaces require cables that are plenum rated, meaning that they meet higher standards like being more resistant to fire and producing less smoke in the case of a fire.

Plenum and non-plenum cables are the same cables with one key difference: the outer jacket, (or insulation), that protects the cable.  With that in mind, essentially any cable could become a plenum cable if it had the proper, plenum rated jacket/insulation.  There are 15 different levels and/or variations of jacket ratings for cables, with the highest ratings providing the most fire-resistant jackets that also produce the least amount of smoke, (in the event of a fire).  Only the highest jacket rating, CMP, (Communications Multipurpose Plenum), technically meets the standard of being a plenum cable.  Anything not rated as CMP would be considered a non-plenum cable.

While any cable can technically be made into a plenum cable, it is more typical to see networking cables, (like Cat5e and Cat6), in plenum variations.  Coaxial cable is another popular type of cable commonly available with plenum options, as these are often used in DAS, (Distributed Antenna System), environments.

One thing that should be noted as a key difference between plenum and non-plenum cables is the cost.  The higher the jacket rating on the cable, the higher the cost will be.  But there is no doubt about the safety benefits that come with the more highly rated cables.

Where to Use Different Rated Cables

Article 800 of the National Electrical Code (NEC) stipulates where different rated cables can be used in commercial buildings.   For example,

The last part of that paragraph is what really matters, as it states only “Type CMP plenum-rated cables” are what can be used in plenum areas.  So, what exactly is the difference in these cable ratings, and where are the different rated cables allowed to be used?

CMP (Communications Multipurpose Plenum) rated cables have the highest fire resistance ratings compared to other cables, in addition to having a low-smoke jacket.  Also, if CMP rated cables were to be burned, they would release a very low amounts of toxic fumes.  These are the cables that are often referred to as “plenum cables” that are used in commercial buildings.  Given their excellent safety characteristics, it’s easy to understand why they would be required in plenum spaces.

CMR (Communications Multipurpose Riser) rated cables are used in commercial buildings, typically in vertical applications, like on risers.  They are less fire resistant than CMP and will release a higher level of toxic fumes if burned.  For these reasons, they are not to be used in the plenum spaces of buildings.

CM (Communications Multipurpose) rated cables are also used in commercial buildings but can be used for much more general use.  They are the least fire resistant of the three ratings and, like the CMR rated cables, will release a higher level of toxic fumes if burned.  As you probably already guessed, CM rated cables cannot be used in the plenum, or in vertical applications, (i.e., risers).

While CMP rated cables are easily the most expensive, they hold the distinct advantage of being able to be used just about anywhere in a commercial building.  The same cannot be said of CMR rated cables, and CM rated cables will be quite limited in where they can be used throughout a commercial structure.

Can I Use Non-Plenum Cable If It Is In A Conduit?

How Do You Know if a Cable is Plenum Rated?

Samples of cables are sent to laboratories who test them to ensure they meet the necessary plenum requirements.  There are two primary laboratories that do most of the testing for Plenum Cables: Underwriters’ Laboratories (UL) and the Electrical Testing Laboratories (ETL).  If the cables do meet the necessary testing requirements, a certificate will be provided to the cable manufacturer that states the cable met and/or passed testing requirements.  It is common for cable manufacturers to make these certificates available to their customers.

You can also look up product numbers on either the UL or ETL websites.  If you find a product on one of these sites, it is what is referred to as being “UL listed” or “ETL listed,” which means that it passed the tests performed by those respective laboratories.

Who Tests Cables to Make Sure They Are Plenum Rated?

There are two labs who are best known for testing plenum cables: Underwriters Laboratories (UL) and the Electrical Testing Laboratories (ETL).  Both are Nationally Recognized Testing Laboratories, (NRTL), which means that they are recognized by the Occupational Safety and Health Administration (OSHA), which can be particularly important in the United States.

In truth, there is no difference between UL or ETL certifications as they test to the same standards.  What is important is to make sure the cable you get is tested by a Nationally Recognized Testing Laboratory, (NRTL), like UL or ETL.  For more information about UL vs ETL certifications, we highly recommend this post from Triad Magnetics.

Who Sets Plenum (and Non-Plenum) Standards?

What cables meet plenum standards is determined by the National Fire Protection Association, (NFPA).  In truth, the NFPA is only rating the outer jacket of cables and the jacket’s fire resistance capabilities, etc.  There are over 15 different cable jacket ratings, and for the purposes of what cables qualify as being “plenum rated,” only CMP, or Communications Multipurpose Plenum, qualify.

What is the National Electrical Code (NEC) and Why Does it Matter?

“Adopted in all 50 states, NFPA 70, National Electrical Code (NEC) is the benchmark for safe electrical design, installation, and inspection to protect people and property from electrical hazards.”

The NEC, (also known as NFPA 70), is not technically law, but nearly all state and local governments follow NEC guidelines and, in many cases, have made them law on a more local level.

Is NFPA 70 and the NEC the Same Thing?

Yes.  The NFPA 70 is the National Electrical Code (NEC).  The NFPA, as an organization, establishes fire codes and standards for many different applications, industries, etc.  For example, NFPA 1 is also known as the “Fire Code,” while NFPA 10 is the “Standard for Portable Fire Extinguishers,” and NPFA 54 is the “National Fuel Gas Code.  You can see a list of all the NPFA codes and standards here.  NFPA 70 is just one of the many codes established by the NFPA, and the terms NFPA 70 and the National Electrical Code, (or NEC), are synonymous.

Why Do NEC Cable Requirements Matter?

As stated previously, the NEC is not technically law, but as the NFPA states, it has been “adopted in al 50 states.”  The NEC is the primarily guideline being used on state and local levels to establish electrical safety in buildings.  It is possible that some NEC standards may not be required in some areas, but it is unlikely.  Worse yet, if NEC standards are not followed, it could result in fines or loss of permits.  Additionally, in the event of a hazardous situation, (specifically loss of property or life), builders could be held liable for negligence for any code violations.